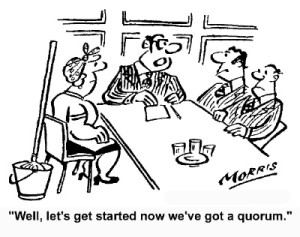 A friend recently described a board meeting when 20 members, who had driven or flown in from distant parts, sat around waiting because they couldn’t take action – they didn’t have a quorum. Eventually one straggler arrived and the meeting could begin.

What is a quorum?

A quorum is the minimum number of voting members who must be present for business to be done. It is one of the most sacrosanct concepts of Robert’s Rules of Order. I hope that the reason is obvious—if a minority commits your organization to take action without the rest of the membership being informed or present, rampant unfairness could result. Robert’s Rules insists on protecting the rights of all.

What size should a quorum be?

When you are thinking about the quorum for your group, it’s important to be realistic. Robert’s Rules of Order says that you should set the quorum at a number of members who could reasonably be expected to show up regularly. The quorum size will vary depending upon the size of your group. Basically, larger groups have smaller quorums, and smaller groups have larger quorums.

I had the honor of serving as president of the American Translators Association when there were about 3000 voting members. The quorum was set at either 3% of the voting members or 100 voting members, whichever was smaller. In this example, both numbers are in the same range, since 3% of 3000 is 90.

Quorum for board of directors

No quorum listed in bylaws?

If the quorum is not specified in the bylaws, a majority of the voting members (more than half or more than 50%) is the quorum. Note that it is incorrect to say “50% plus one.” This would imply the possibility, with an odd-numbered board, of half a person. Unless you’re David Copperfield or a similarly talented magician, this cannot be!

Check your state law about a quorum

It’s important to see what your state law says about quorum. In my own state, for example, the Revised Code of Washington says that the quorum for the board of a nonprofit organization must be at least one-third of the director positions.

What can you do without a quorum?

If your body has met and there is no quorum, you are free to take steps to try to get a quorum. Maybe somebody could call in by telephone, if the bylaws allow. Or maybe you have to go to the bar and wrangle a few folks back to the meeting room (I’m not making this up). You could reschedule the meeting to a future time when you’re more likely to get a quorum.

If you start your meeting with a quorum, and then enough members leave that you lose that quorum, you have also lost your ability to make decisions.

It is fine for your body to engage in social or educational activities without a quorum. You just can’t take any ACTION. Without a quorum, you don’t have a proper meeting and there is no board to act. Don’t ignore this requirement and march on ahead – you could find yourself personally liable for the actions that your rump group took on its own responsibility.

When is a quorum not enough?

Counting the vote wrong is dangerous

Posted in Voting and Quorum and tagged authority, ground rules for meetings, legitimacy, no quorum, nonprofit board, parliamentary procedure, quorum, Robert's Rules of Order, rump
← When can you withdraw a motion?Nonprofit boards should not vote to approve minutes →