Ann Macfarlane explains how it all began...

People often ask me how the dinosaurs became a part of Jurassic Parliament. It goes back to 1999, when I became president of the American Translators Association. (I was a Russian-to-English translator at that time.) I wanted to do a good job, so I had started reading Robert's Rules of Order, and found it a pretty daunting book. As I struggled through it, and thought about procedure during board meetings, I learned a bit more, and wanted to share it with the board of directors. But I wasn't sure how to do that without boring them silly. 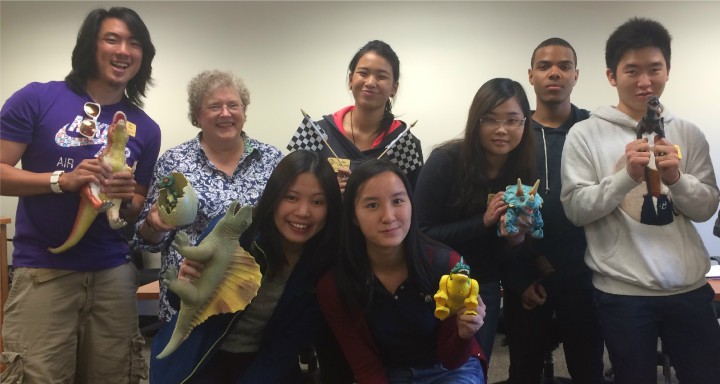 One concept that came to me was the realization that a "motion" is not just a word, it is a thing. Once a group has made a main motion and started discussing it, they have to dispose of it in some way—to adopt it, to defeat it, to send it off to a committee—but they can't just abandon it.

I was mulling over how to get this idea across when my eye fell on some Jurassic Park dinosaurs, belonging to my 9-year-old son, Steve. The movie was very popular at that time, and our house had lots of these creatures under foot.

I picked up a T-rex and thought, "This could be the main motion—it certainly is a definite 'thing'—and then we could use the dimetrodon for the amendment, another 'thing,' and show that the dimetrodon blocks the forward progress of the T-rex. You have to vote on the amendment before the main motion can move ahead….and a 'point of order' could be a flying dinosaur that soars over the heads of the other motions…"

From that moment I developed the whole system, which has certainly given me a lot of pleasure in teaching a subject that can be perceived as dull. I owe it all to Steven Spielberg and my son, Steve.