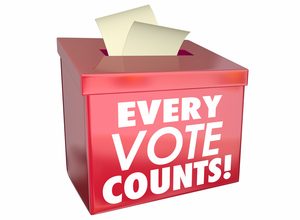 Updated February 17, 2020   Counting a vote wrong can land you in big trouble.

As readers know, the QUORUM is the minimum number of voting members who must be present for business to be done. Once you have your quorum in place, you can take action by discussion and voting. (Read “what is a quorum” here.) Here are four different ways of counting a vote.

A MAJORITY OF THE ENTIRE BODY is a hard requirement for large groups. If our club has 500 members, and 100 are present, the motion cannot succeed under this requirement because it would take 251 votes in favor to pass. It’s easier on a small body. If our board has 15 members, 8 must vote in favor (a majority = more than 50% = more than half of 15) for a motion to pass.

The “entire body” is usually considered to be actual live people holding office who are eligible to vote. For example, say your board consists of 15 people but 4 have resigned, so there are only 11 holding office. A “majority of the entire body” will be 6 people (a majority = more than 50% = more than half of 11).

A MAJORITY OF THE FIXED MEMBERSHIP is the strictest requirement of all. If our board has 15 members, but 7 have resigned, so there are only 8 holding office, a “majority of the fixed membership” will still be 8 people (a majority = more than 50% = more than half of 15).

Counting a vote wrong by me

These are subtle distinctions but they have consequences! In Washington State, for instance, under RCW 24.03.110  a MAJORITY OF DIRECTORS PRESENT must vote in favor for a motion to pass.

I had a sad personal experience of this when chairing a meeting of a 13-member board. Everyone was present, 6 voted in favor, 4 voted against, and 3 abstained. As chair I declared that the motion had passed, but it in fact it had failed, since 6 is not a majority of 13. It was not pleasant to discover this error. Be sure to get familiar with the laws of your state of incorporation governing your nonprofit board or local government body. Consult your attorney when in doubt.

What about “abstain” when counting a vote?

You can read about two-thirds votes here.

When there are 3 or more candidates in an election, and none of the candidates receives a majority, the candidate with the most votes has a PLURALITY. Under Robert’s Rules, a plurality does not elect, so another round of voting must be held. Some associations put into their bylaws that a plurality does elect, which you can do, but it might lead to a difficult situation for the individual who is expected to lead with only a minority of the membership behind him or her.

Note that under Robert’s Rules, you cannot drop the person with the least number of votes from the ballot, unless you have specific provisions authorizing this.

Do you have voting stories? Share them with us!

What is a quorum and why does it matter?

When is a quorum not enough?