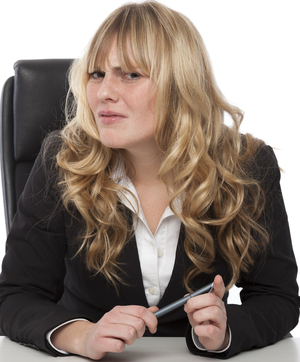 Human beings have a sharp and useful instinct for the negative. If we sense that somebody is angry with us, or hostile, we prick up our ears and prepare to defend ourselves. This “negativity bias” probably evolved as a survival trait. Creatures and people who go their way blithely, unaware of potential danger, may not survive danger when they encounter it.

Leaders must be careful not to trigger this bias. In general, keep a pleasant or neutral expression on one’s face, depending on circumstances. Don’t glare, roll your eyes, or engage in sarcasm. Watch your eyebrows. When you frown in concentration, another person may interpret it to mean that you are upset with them.

A mayor told me that during his first meeting, his mother, sitting in the audience, was very concerned about his mental state. In fact, he was just thinking hard.

Since the emotional aspect of meetings is more important than the procedural side, this is a key skill to develop. Controlling the expression of your own emotions when you feel negative will prevent a cascade of negativity among the members of your group.

Negativity bias can be useful

One additional point: there are times when you may want to use negativity bias. If a member of your board is saying something completely off-base, untrue, or likely to cause damage, frowning or glaring may give them a hint. Using your authority in such a case could help prevent unpleasantness.

Bottom line: the facial expression of the leader of the group has consequences for the success of your meeting, and you need to be aware of your own expressions.