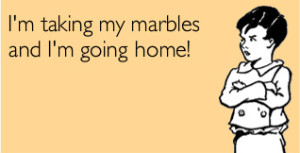 Drawing by Naomi2270307 for someecards

Have you ever been at a meeting where the person who made a motion becomes unhappy about the direction of the discussion, and says, “OK, I withdraw my motion”? There is a common misunderstanding that when this happens, the motion is no longer under consideration by the body. NOT SO! The whole group has to give permission for a maker to withdraw a motion.

The principle is that once a motion has been made, seconded, and stated by the chair, it belongs to the body as a whole. The maker has an interest in seeing it passed, of course, but he doesn’t “own” it. So if he thinks it would be desirable to withdraw it, he has to ask.

In this example, the politics of the situation convince the maker to request that her motion be withdrawn. A different situation might occur when discussion has convinced you that your motion is not a good idea. Under Robert’s Rules of Order, you may not speak against your own motion. Instead, you may ask that it be withdrawn.

Sample script to withdraw a motion

Here is a sample script. If you would like help in developing a script for your unique situation, you can book an appointment here.

Member A, the maker of the motion:  Chair, I request permission to withdraw my motion.

Chair: Is there any objection if Member A withdraws his motion?

[Pause and wait – if silence, then say] Hearing none, the motion is withdrawn.

[However, if somebody says “objection,” then the chair will say] Since there is objection, we will vote on this. Is there a second?

EITHER  The “ayes” have it and the motion is withdrawn.

OR The “noes” have it and discussion on this motion will continue.

For clerks and secretaries, note that when you withdraw a motion, the text and the fact of its withdrawal are ordinarily not included in the minutes.