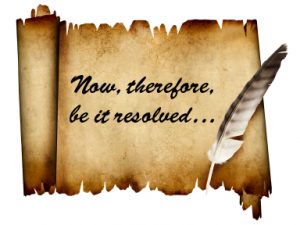 In Robert’s Rules of Order, a RESOLUTION is a special type of MOTION. My friend the late John Stackpole, a distinguished parliamentarian, described it this way: “A resolution is a motion in fancy dress.”

A resolution is used for important or complex questions, or when greater formality is desired. A resolution should be put into writing before it is offered. It’s a good idea to prepare and distribute a proposed resolution in advance of a meeting, so that the members will have time to grapple with it.

How to move a resolution?

To move a resolution, a member seeks recognition at the proper time and says, for example:

I move the adoption of the following resolution: Resolved, That the Dinoville Service Club will partner with the Dinoville Welfare Department to provide a program of after-school activities for delinquent dinosaurs.

Such a resolution is processed in the same way as a main motion.

Adding a preamble to a resolution

Ordinarily, Robert’s Rules of Order recommends that reasons for adopting a motion should not be included within the motion itself. The reason is that some members who approve of the action proposed may dislike voting for the motion if it states reasons with which they disagree. However, when special circumstances make it desirable to include a brief statement of background, the motion can be cast as a resolution with the background or reasons incorporated in a PREAMBLE.

The preamble is placed before the motion itself—the resolving clause. For example:

Whereas, Continued delinquency among young dinosaurs in the City of Dinoville poses a continuing challenge to the well-being of our city; and
Whereas, The Dinoville Service Club has made a special commitment to at-risk youth; and
Whereas, The Dinoville Welfare Department has developed a promising program of activities to engage delinquent dinosaurs after their school day is ended; now, therefore, be it
Resolved, That the Dinoville Service Club will partner with the Dinoville Welfare Department to provide a program of after-school activities for delinquent dinosaurs.

Processing a series of resolutions

It is possible to offer a series of resolutions by a single motion. If the resolutions are related to a single subject, and a member wants to consider them separately, the member can move to “Divide the Question,” which takes a majority vote. If the series contains resolutions on independent subjects, any resolution in the series must be taken up and voted on separately at the demand of a single member.