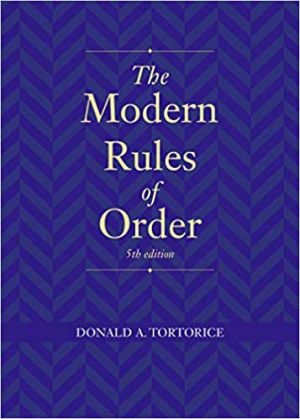 The Modern Rules of Order, 5th edition (MRO), by Donald A. Tortorice, a law professor at William and Mary School of Law, is one of the many works intended to replace Robert’s Rules of Order Newly Revised, 12th edition (RONR), as a parliamentary authority for adoption by deliberative assemblies. In this reviewer’s opinion, MRO is woefully inadequate for that purpose.

It is not difficult to understand why some organizations and individuals may want to look for a simpler alternative to RONR. With its over 700-page encyclopedic treatment of parliamentary procedure, RONR can seem daunting to all but the most dedicated students. Nevertheless, readers would be well-advised to resist the siren call of MRO, with its overly simplistic approach in 68 pages, and instead devote their efforts to learning the basics of RONR.

The reality is that the average meeting-goer can, with relative ease, learn enough of the essence of RONR to be an effective meeting participant, without having to peruse the entire volume. This can be achieved by studying RONR’s companion work, Robert’s Rules of Order Newly Revised in Brief, 3rd edition, which can be accomplished in a single weekend. (Read more about this book here.)

A detailed discussion of the many differences between MOR and RONR is beyond the scope of this review. However, a brief look at some of the major differences should be sufficient to illustrate the inadequacies of MOR.

First, MOR contains only two actual rules, which amount to no more than restatements of general parliamentary law. Rule 1, “Role of the Chair,” specifies that “[a]uthority for conduct of the meeting shall be assigned to the chair, who shall be responsible for timely, fair, and reasonable conduct of the meeting’s business,” subject to appeal to the membership (p. 1). Rule 2, “The Rules and Governing Law,” provides that “[t]he rules of conduct of the meeting are subordinate to the bylaws of the organization, which are subordinate to the articles (or charter) and to prevailing state or federal law” (p. 2). The two mandatory rules are supplemented by thirteen guidelines, serving as “guid[ance] to the chair, subject to Rules 1 and 2” (p. 2).

In this reviewer’s opinion, denominating the guidelines as just that, guidelines rather than rules, leaves far too much discretion in the hands of the chair, especially for a typical member-driven organization. True, the chair’s discretion is not absolute, since “any ruling [by the chair] may be appealed to a majority vote of the meeting” (p. 1). Nevertheless, in the reviewer’s experience, members often are reluctant to appeal a ruling by the chair unless they are confident that the ruling is incorrect. And if the ruling is based on a guideline rather than a rule, who is to say that the chair is wrong? As no less a personage that Thomas Jefferson said, “It is much more material thar there should be a rule to go by than what the rule is; that there may be uniformity of proceedings in business, not subject to the caprice of the Speaker, or capriciousness of the members.” Thomas Jefferson, Manual of Parliamentary Practice (Applewood Books republication), p. 2.

Aside from the issue of guidelines versus rules, MRO has other serious shortcomings. One of the more troubling issues is the absence of a meaningful quorum provision. As defined in RONR 3:3, the quorum of an assembly is “[t]e minimum number of members who must be present at the meetings of a deliberative assembly for business to be validly transacted ….” Further, RONR 40:2 specifies the default quorum for different types of deliberative assemblies in the absence of a quorum provision in the bylaws. MRO, in contrast, contains no default quorum provision, leaving open the question of what constitutes a quorum in the absence of a provision in the bylaws. Even more troubling is that while RONR and most other parliamentary authorities require that a quorum be present for the entre meeting for business to be conducted, MRO provides that “[o]nce a quorum is established, the meeting can continue to transact business until adjournment, even if departure of members leaves less than the original quorum” (pp. 16-17, emphasis added). This leads to the possibility of binding decisions being made by a totally unrepresentative minority if the meeting drags on so long that many members have departed.

Further, even if a majority wishes to leave a seemingly interminable meeting, they cannot adjourn the meeting to prevent the continuation of business. Instead, MRO provides:

Upon completion of the meeting’s agenda, if no further business is indicated, the chair shall adjourn the meeting. Adjournment may be accomplished by motion or announcement of the chair. A motion to adjourn prior to completion of the agenda is not appropriate and therefore out of order [p. 10, emphasis added].

Thus, while a motion to adjourn can be made, it serves no purpose. It is out of order before the agenda has been completed, and unnecessary once the agenda is completed.

Another aspect that this reviewer finds troubling is MRO’s discussion of reports of officers and committees. RONR and most other parliamentary authorities with which the reviewer is familiar say that (with a few exceptions) reports should simply be filed, and not approved. MRO, in contrast, states, “Following each report, the chair may ask for a motion of approval or may simply state that, without objection, the report stands approved” (p. 19, emphasis added). The reviewer finds that to be not only unnecessary, but potentially dangerous for some reports (such as the treasurer’s report).

Why is it potentially dangerous to approve a report? As noted in RONR 51:16, “If a motion ‘to accept’ [a report] … is adopted and given its proper interpretation, it implies that the assembly has endorsed the complete report.” (Although RONR uses the term “accept,” the reviewer believes that the word “approve” means the same. See RONR 51:14.) Regarding the treasurer’s report, that would mean that the assembly agrees that the report is accurate in every respect. But how can the assembly know that it is accurate if the financial records have not been audited? For that reason, RONR specifies that, rather than the treasurer’s report, “it is the auditor’s report which the assembly approves.” RONR 48:24 (emphasis added). Further, “[t]he adoption of the auditor’s report has the effect of relieving the treasurer of responsibility for the period covered by the report, except in case of fraud.” RONR 48:25. Although not stated explicitly, the implication is that approval of an unaudited treasurer’s report would have the same effect, because “the assembly has endorsed the complete report.” RONR 51:16.

In summary, the reviewer believes that while MRO may be suitable for adoption for stockholder corporations, its suitability for member-driven organizations is questionable at best, and potentially dangerous at worst. This reviewer strongly recommends that such organizations resist its temptation. 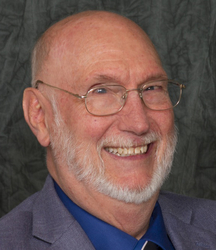 Jurassic Parliament expresses its gratitude to Weldon Merritt for allowing us to share this valuable information with our readers. Weldon has also authored “Rights and Responsibilities of the Member” and “Robert’s isn’t the only game in town – consider AIPSC.”