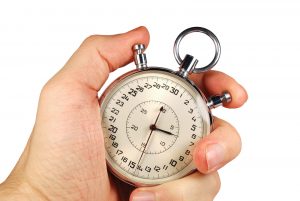 The mayor of Alexandria, Virginia began council meetings by responding to each person giving public comment, sometimes delaying the start of regular business three hours or more. Was this reasonable? No. We need time limits to establish structure and create productive meetings. Robert’s Rules says that members have the right to an efficient meeting. It takes effort to do this, and for the chair to maintain the limits, but the effort will pay off big time.

Set an overall time limit for the meeting

If you are a private nonprofit board, a good target for a regular board meeting is two hours. After two hours, people’s brains begin to fag, and the meeting becomes less productive. If you are a local government body, you will still want to try to set an overall time limit on ordinary occasions.

We recommend preparing a “timed agenda,” in which you set expected time limits for each individual item and also list the hour at which they will begin. Download an example here. It takes effort to do this. You may need to spend as much time preparing the agenda as the time of the actual meeting. But your members will thank you for considering the true importance of each item and carefully crafting the expected time.

Include the words “all times approximate” on your agenda. This gives you flexibility, during the meeting itself, to make simple adjustments without having to take a formal vote. If a given item has been allocated 20 minutes from 7:30 to 7:50 pm, when it is 7:45, the chair can say, “We have five minutes left for this item. Are you ready to wrap it up, or should we extend our discussion by 10 more minutes?” Our PDF includes a sample timed agenda.

Set time limits for members of the board when speaking

If you have adopted Robert’s Rules of Order, you already have a time limit for members of your board or council when speaking: 10 minutes per speech. In our view, this is too long. We recommend adopting a time limit of 5 minutes per speech. Read our post on special rules of order on how to do this—it’s easy for small boards (up to about 12 people). If someone goes past the limit, the chair must stop them, or a member may raise a Point of Order.

Limit or extend time as needed

The handy motion, “Limit or extend the limits of debate,” allows your group to shorten the time planned for debate, or to give a speaker more time if desired. This motion requires a second but it cannot be debated, thank goodness! However, it can be amended to change the proposed time. It takes a two-thirds vote to pass.

Use “call the question” correctly

Another motion that cuts off debate is “to call the question” (the formal name is “To move the previous question”). If this vote passes, discussion on the item is finished and the vote is taken immediately. This motion is often misused! Read our blog post here to understand how to “call the question.” A single person cannot stop the debate on their own—the group must vote to do so.

We recommend that local governments set a time limit for the public comment period and for individual speakers. We like three minutes for speeches. Two minutes is too short, in our view, and five minutes too long. Here again, during the meeting the council can use the motion “to limit or extend the limits of debate” if it chooses.

The courts have found that public bodies may set limits to time, place and manner of public comment, as long as these limits are viewpoint-neutral.

Download our Guidelines for Public Comment in Local Government Meetings here. Note that these guidelines are based on Jurassic Parliament’s experience and are not a part of Robert’s Rules of Order.

On a small board, don’t limit members to two speeches

For large meetings, the general rule in Robert’s Rules of Order Newly Revised, 11th edition is: “Unless the assembly has a special rule providing otherwise, no member can speak more than twice to the same question on the same day….”  p. 389. However, Robert says when describing the rules for small boards on p. 488: “There is no limit to the number of times a member can speak to a debatable question.” We agree with this rule for small boards (up to about 12) as long as the group follows the Principle of Equality, that no member may speak a second time until everyone who wishes to do so has spoken once. Read about and download the small board rules here.

Use the Exploratory Round Robin for complicated topics

There is another method of discussion that has proven very effective for complicated topics, called the Exploratory Round Robin. You can read about it and download the PDF here.

The variety of human opinion is infinite, but our meeting time is not. By setting and maintaining time limits for your meeting, your group will allow a hundred flowers to bloom, while still keeping an orderly garden for discussion.