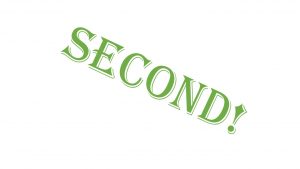 Second the motion—everybody knows how to do that, right? Well, in fact there are some funny ideas floating around about this ordinary act of meeting procedure.

Robert’s Rules of Order Newly Revised, 11th edition, says that a person seconds a motion in order to indicate that they would like to talk about it. In other words, “second the motion” is an affirmation of interest in the proposal. The theory is that there ought to be at least two people who are interested in an idea before the group spends its time in discussing it.

In the olden days, to second the motion meant that you approved of it—that you sponsored it. This is no longer so. You can even second a motion you disagree with, if you would like to explain why it’s a bad idea.

Robert says that if the members have started discussing a motion, no formal second is needed, since it is already clear that at least two people wish to discuss it.

If you wish to second a motion, once the maker has stated the motion, just call out “second!” You do not need to be recognized (acknowledged) by the chair. The chair, hearing your second, should then immediately say, “It has been moved and seconded that…. Is there any discussion?” The person who makes the motion has the right to speak first in favor of it, if they wish to.

Note that Jurassic Parliament has a different position. We believe that it is ALWAYS good to require a second, even in small boards. Otherwise, you run the risk of “grandstanding”—people making a motion just to hear their own voice, or to make a political point. This is not a good use of the group’s time.

If a member makes a motion and no one seconds it, the chair may ask, “Is there a second?” and pause briefly. If no one speaks up, the chair should say, “Hearing no second, the motion will not be considered” and move briskly on to the next item of business. A trainee once told me how the chair had asked her to second a motion. Don’t do this! All these acts should be purely voluntary.

Name of seconder—in the minutes?

Robert’s Rules says that the name of the seconder should not be included in the minutes. However, if you are a body subject to a law, regulation or policy that requires this, go with that authority! In the State of Washington, for instance, we have heard that the Small Cities Auditor will mark down cities who produce municipal minutes that do not include the name of the seconder.

No second to the motion—in the minutes?

The Robert’s Rules Association has issued an opinion that all main motions should be included in the minutes, even those which have not been seconded. You can read it here. Since the opinion is not part of the book of Robert’s Rules, it is not binding, but the Association considers that it should be strongly persuasive.

Second the motion—can you withdraw a second?

Some motions don’t need a second

Note that there are several motions in Robert’s Rules that don’t need a second: nominations, Point of Order, Request for Information, and so on. You can read details in Robert’s Rules of Order Newly Revised, 11th edition, tinted pages 6-29 and 40-41.

Does this untangle the mysteries of “second the motion”? Is it all clear as mud? Share your questions with us!