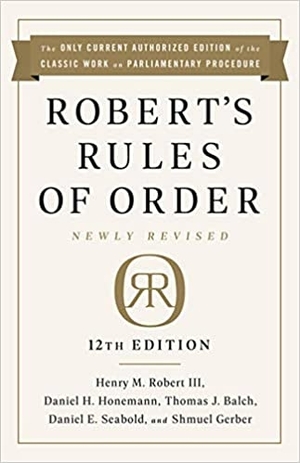 Robert’s Rules of Order Newly Revised, 12th edition says on page 464, “some of the formality that is necessary in a large assembly would hinder business” in a small board.

The book goes on to list seven significant bullet points about the ways that the rules for small boards are different.

Jurassic Parliament agrees with some of these rules, but not all of them. Read our thoughts on this below.

If your bylaws say that “meetings shall be run according to Robert’s Rules of Order Newly Revised, latest edition,” and your board has  12 or fewer members, you are fully entitled to use Robert’s special rules for small boards.

If you have a slightly larger board, up to about 20 people, you may also find the small board rules useful. In that case, you must adopt the rules you wish to use, which is easy to do. To learn how, see our post on “What are special rules of order?

Robert’s Rules of Order Newly Revised 12th edition was published in September 2020. Jurassic Parliament materials published prior to that time refer to the 11th edition. In substance the two editions are the same. There are minor differences, textual changes, and a change in reference method. The new edition gives references by section number, not by pages.