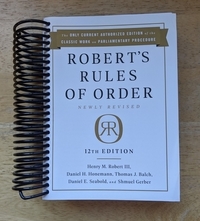 People are sometimes confused about precedence of motions in Robert’s Rules of Order. In essence it is rather simple. The principle is that each motion has a number or rank. When motions are pending, motions with a higher rank may be made, but motions with a lower rank are out of order (not allowed). The main motion has the lowest rank. It can be made only if there is no other motion pending (being discussed or processed).

There are 13 motions with ranks. “Point of Order” and “Request for Information” do not have ranks, but are dealt with immediately. Contrariwise, the “bring back” motions (Reconsider, Rescind, Amend Something Previously Adopted) have no rank and can only be made, in general, if there is no other business on the table, no motions under consideration. There are other motions as well, but the ranking motions are the key ones to learn about.

The truth about this system is that it isn’t difficult, it’s just a little strange. Someone who takes the time to learn about these ranks, and to apply them, will have greater success in dealing with board or council matters. Someone who yields to internal bafflement and avoids the entire subject will have less.

Note also that the word is pronounced “pree-SEE-dence,” rather different from our usual pronunciation of “PREH-sih-dence.”

We invite you to download our “Motions Chart,”  a PDF file that gives the key information on this topic in concise form. You can learn more about the most commonly used motions in our book, Mastering Council Meetings.

Example of precedence of motions in action

If a member wants the organization to do something, he proposes a Main Motion. For example,

“I move that we hold an Arts Festival this summer.”

If another member wants to talk about this idea, that person says “Second!” The chair then says,

“It has been moved and seconded that we hold an Arts Festival next summer. Is there any discussion?”

This is the Main Motion, a proposal for action.

(If no one seconds the Main Motion, the chair says, “There is no second, so the motion will not be considered,” and moves immediately to the next item of business.)

MOVE TO CHANGE THE PROPOSAL

Suppose that during discussion, one member realizes that this summer is too soon. She can move to Amend the Main Motion. This is a motion that suggests changing the Main Motion to improve it. She would say,

If another member wants to talk about this amendment, she says “Second!” The chair then says:

“It has been moved and seconded that we amend the motion by striking the words ‘this summer’ and inserting the words ‘next summer.’ Is there any discussion?

This is the Motion to Amend, a proposal to change a Main Motion.

The confusing part is that the group discusses and votes on the Motion to Amend BEFORE voting on the Main Motion. The reason for this pattern is in order for the members to make the Main Motion as good as it can be—to “perfect” the Main Motion. Read our article Amendment in Robert’s Rules for more information on this.

MOVE TO POSTPONE THE PROPOSAL TO THE NEXT MEETING

Now, in the course of discussion, another member thinks that the group needs more time to research festivals in the area before making a decision. That member moves to Postpone the Motion to the next meeting.

If another member wants to talk about this, he says “Second!” The chair then says:

“It has been moved and seconded that we postpone this Main Motion to our next meeting. Is there any discussion?”

This is the Motion to Postpone to a Certain Time.

In this example, each type of motion has a number or rank attached to it.

There are 13 motions with ranks in all, but some of them are seldom used. The Main Motion has the lowest rank of all, Rank 1, which seems odd, but is how the system works.

The principle is that WHEN A MOTION IS PENDING (under consideration), any motion with a higher rank may be made, but any motion with a lower rank is out of order. And in general, the group may discuss only the pending motion.

We process each motion in reverse order from when it was made. It is a “LIFO” system—Last In, First Out.

For example, if we are discussing postponing this motion to the next meeting, which has a rank of 5:

In the sequence given above, this is what would happen:

“That we hold an Arts Festival NEXT SUMMER.”

Making a motion is a power move