The motion to amend presents many challenges. We hope this article provides some clarity.

Make a Main Motion to start the process

Robert’s Rules of Order presumes that a group will make a Main Motion—a proposal for action—before holding any discussion.

Example: I move that we purchase two new computers for the headquarters office.

Note that in small boards (up to about 12 people), it is all right to hold discussion without a specific motion. Read our article Small board rules are different to learn more. If you are a small board and want to discuss things first, Jurassic Parliament recommends this process:

Amend the Main Motion to improve it

Once a Main Motion has been made, seconded, and stated by the chair, it can be amended during the discussion. A member proposes to amend the motion in order to strengthen it, or make it more likely to pass.

Example: I move that we amend the motion by inserting the word “Macintosh” before the word computer, so that the motion would read, “I move that we purchase two new Macintosh computers for the headquarters office.”

Anyone can move an amendment, even the person who made the original motion, though you might look a bit foolish if you make a motion and then immediately offer a change (an amendment) to it.

An amendment must be germane—relevant—to the motion at hand. If the board is discussing a motion to purchase new computers, someone who proposes the add the words “and also a new office refrigerator” will be out of luck. If there’s a question as to whether a proposed amendment is germane, the chair rules, subject to appeal. 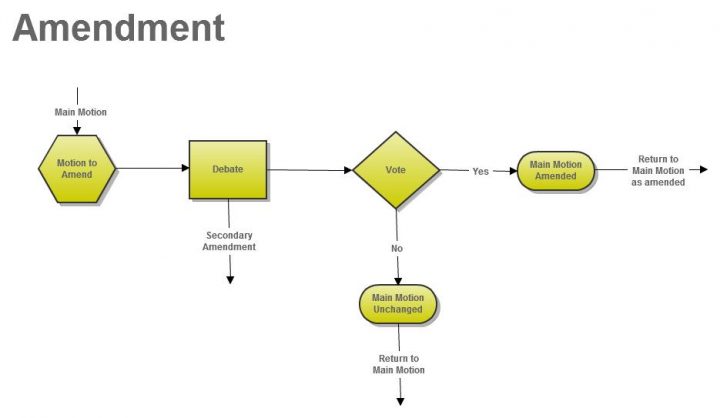 Process and vote on Amendment BEFORE the Main Motion

You vote on the Amendment before you vote on the motion. This is counter-intuitive. We haven’t even decided whether to buy new computers, and we’re discussing whether we should buy Macs or PCs! The purpose of this rule is to allow the group to make the motion as good as it can be—to “perfect” the motion—before the vote is taken. Often this works well. However, it’s also fine to vote on the main motion first, and to take up consideration of other details, such as the type of computer, at a later time.

See our article Processing a motion in Robert’s Rules for the eight steps to process an amendment. Once you’ve finished processing the amendment, you then go back to discussing the Main Motion as amended (if it was amended), or the original Main Motion (if the amendment was defeated).

Ways to amend a motion

There are several different ways to amend a motion:

Certain kinds of amendments are not allowed

Robert’s Rules specifies that these kinds of amendments are improper:

Once you’ve processed your amendment and voted on it, other amendments may be proposed, provided that they apply to a different aspect of the Main Motion.

This is an example of amending by ADDING words. Note that it takes special actions, e.g. Motion to Reconsider, to change something you’ve already amended.

Friendly amendments are handled just like any other amendment

If someone offers a “friendly amendment,” the chair should immediately ask, “Is there a second?” Avoid the pernicious habit of turning to the maker of the motion to ask if they will accept the friendly amendment. The motion belongs to the entire group, and the maker has the same rights as anyone else, neither more nor less. Read our article Friendly amendment in Robert’s Rules of Order for more. 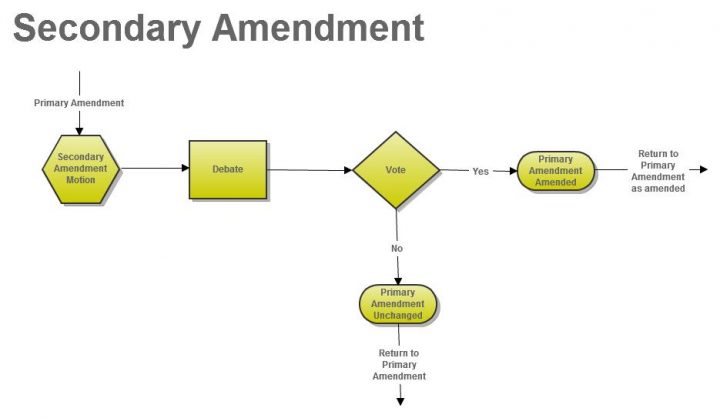 Details of Amendments do not go in the minutes

Note that Robert’s Rules says that the minutes include the final version of the motion as amended. Details of Amendments and how members vote on them are not included.

Example: After discussion and amendment, a motion to purchase two Macintosh computers for the headquarters office at a maximum cost of $3000 was approved.

Finally, note that while Amendment has the rank of 3 on the Motions Chart (read our article on Precedence of Motions in Robert’s Rules for more on this), it can be applied to motions higher in rank than itself, such as Motion to Refer to Committee or Motion to Recess.

Sample script for processing an amendment

Member A:  I move that we hold a cruise on Dino Bay.

Member B: I second the motion!

Chair: It has been moved and seconded that we hold a cruise on Dino Bay. We will now debate the motion. [debate]

Member C: I move that we amend the main motion by adding the words “to be organized by the Delta Cruise Company.”

Chair: It has been moved and seconded that we amend the main motion by adding the words “to be organized by the Delta Cruise Company.” We will now debate the motion to amend. [debate]

The motion is that we amend the main motion by adding the words “to be organized by the Delta Cruise Company.” All those in favor say “aye.”

The motion is that we hold a cruise on Dino Bay, organized by the Delta Cruise Company. All those in favor say “aye.”

Chair: The ayes have it, the motion passes, and we will hold a cruise on Dino Bay, organized by the Delta Cruise Company. The Social Committee will make the plans for this event. The next item of business in order is…

Read our article Processing motions in Robert’s Rules for more information on motions.