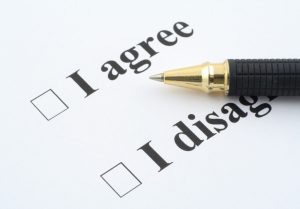 It is a basic principle of parliamentary procedure that the decision of the majority, voting at a properly called meeting, is the decision of the body as a whole. The members whose views did not prevail are bound to go along with the majority. This goes back deep in time, to the origins of our entire system of democratic governance.

It follows from this principle that the minority members of a body may not take action that would tend to undermine the decision. What does “undermine” mean? It means trying to prevent the decision from being carried out.

Robert’s Rules of Order Newly Revised, 11th edition, says this: “An organization or assembly has the ultimate right to make and enforce its own rules, and to require that its members refrain from conduct injurious to the organization or its purposes” (p. 643). In another book, Robert gives this example: If a club has planned a course of lectures, club members who are unhappy about it may not talk against the course so as to interfere with the sale of tickets (Parliamentary Law, pp. 329-330).

They may not do so because their loyalty to the body transcends their individual views. In becoming part of a club, a group of people, they agree to submit their personal judgment to the will of the group. This is an unnatural thing to do! However, it is essential if any group is going to function.

Of course a board member is free, within certain limits, to try during meetings to persuade their colleagues to change the decision. If that doesn’t work, and the member remains deeply opposed to the decision, the member may have to consider resigning.

Let’s look at three different situations where this question may occur.

Private nonprofit boards will sometimes establish a policy that the board “speaks with one voice.” Members are encouraged to be as vocal as they like inside the meeting. Once the decision has been made, however, they are bound not to criticize it in public. For charitable nonprofit boards, this certainly make sense.

Jurassic Parliament believes that membership organizations such as professional associations may choose not to impose this restraint, depending on the nature of their members and their organization. If board members are allowed to say in public that they disagree with a decision, and to explain why, they are still obliged not to try to undermine the decision.

Local governments and public bodies are different from private organizations. It seems obvious to us that under the First Amendment to the Constitution, elected officials and citizen volunteers have the right to speak out when they hold a different view from the body. At the same time, they may not try to undermine the body’s decision.

We encountered an example some years ago when a city council majority took a position with regard to a local environmental issue. The minority members subsequently wrote a letter to the responsible state department stating that they felt that the council’s position was wrong—they preferred a different position. This was improper, because the action was intended to influence the state department’s decision. The minority members were in violation of their duty to the council and their duty to uphold democratic principles.

When there are strongly divided views in local government, the difference between “stating a view” and “undermining a decision” can be challenging. We encourage minority members of local government to do some soul-searching before criticizing a board action in public. Is the action merely a statement of personal views, or is it an attempt to undermine or counteract the board’s decision? As Cornell Clayton of Washington State University says, “The willingness to engage in honest debate and lose on issues you care deeply about reaffirms your commitment to common citizenship.”

As always, this information is provided solely for educational purposes and does not constitute legal advice.