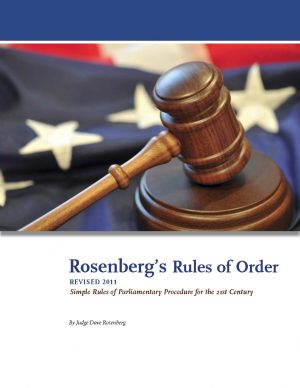 Rosenberg’s Rules of Order is a simplified set of parliamentary rules widely used in California. In many respects it parallels Robert’s Rules of Order. Rosenberg offers an excellent discussion on the role of the chair and the basic format for an agenda item discussion. However, Jurassic Parliament believes that there are several problems with Rosenberg’s Rules. This article lists the concerns. Our PDF compares the two authorities using these editions: