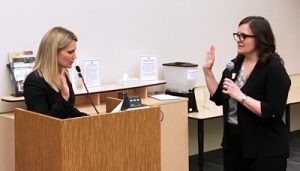 The clerk of a local government meeting or the secretary on a nonprofit board has a high calling. Under Robert’s Rules, two persons must be present for a valid meeting: the chair and the secretary. They cannot be the same person, and state law often specifies this as well.

The clerk or secretary keeps the record of the meeting, the minutes, which in case of dispute can become critical to resolving conflict and moving ahead. In a lawsuit, the minutes of a meeting provide evidence of what the body decided.

It is unfortunately true, however, that clerks can be treated in a manner very different from their real importance. They are sometimes regarded as low-level functionaries who should just do what they are told and get on with their job.

What is the job of the clerk/secretary during the meeting?

What is their job exactly? We have identified these roles in the meeting:

These roles are overlapping and may be contradictory. Is it any wonder that clerks are sometimes uncertain about their job?

In an ideal situation, the clerk, the agency administrator, and the governing body understand the challenges and work together to meet them. Read our article, Successful staff interaction in local government meetings, for more on this. Clerks might use our articles as a basis for discussion in their work situation, hopefully ironing out difficulties in advance of the meeting itself.

When should the clerk speak up?

If it’s necessary, however, clerks should also be prepared to speak up during the meeting. Some examples of when that would be appropriate are:

Can the clerk make a Point of Order?

A Point of Order is a motion that can be made when a person believes that a mistake has been made. According to Robert’s Rules, only a member of the body itself can make this motion. Our article Point of Order and Appeal are the heart of democracy explains more about Point of Order.

In some instances, jurisdictions have given this authority to staff. Here is an excerpt from the Rules of Procedure of the City of Ferndale, Washington:

Rules of order not specified by statute, ordinance or resolution shall be governed by Robert’s Rules of Order (newly revised 11th edition.) Any Councilmember or attending staff member may raise a point of order if he/she believes a procedural error has been made. The member states, “I rise to a point of order.” The chair will ask the member to “State your point.” The chair shall decide whether or not a procedural error was made; however, his/her decision may be appealed by Council.

If you as clerk have been authorized to make a Point of Order, either formally as in the example above, or informally, then you should do so if you see a serious need.

With regard to “lack of clarity,” sometimes people mumble, or leave out key information, or make a motion in the middle of explaining their position, so that it’s hard to tell what is actually being proposed. Sometimes bodies take a voice vote and expect the clerk to record who voted how—not always easy to discern!

How should the clerk speak up?

When problems arise, we suggest that the clerk raise a hand and say something like the following:

The key point about the language here is that the clerk uses the “third person.” In other words, instead of saying “I,” the clerk says “the clerk” or “the secretary.” This seems odd and artificial, but it is a very good way to keep things on a professional level. I learned this approach from my work with court interpreters, who are trained to say “the interpreter asks,” so it is clear that they are speaking from that role, and not as a private individual. By saying “the clerk requests…” you remind the body that you have an official function, which needs certain information in order to be carried out. It depersonalizes the issues and helps others see you in the correct lens. 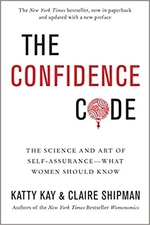 In giving workshops, I have observed that sometimes clerks lack the confidence to speak up. Knowing the right words and growing your confidence will make your work easier. It will help you gain credibility in the eyes of the elected officials, their team, and the community. In this regard, The Confidence Code by Katty Kay and Claire Shipman has some useful suggestions about the science and art of self-assurance. Kay and Shipman quote Richard Petty, a psychology professor at Ohio State University, who defines confidence as “the stuff that turns thoughts into action.” The book is oriented towards women, but the suggestions are universal. You can take their assessment to measure your confidence level by clicking here.

Clerks keep us all going

By taking care and faithfully executing their duties, clerks keep everything in our society in train. Your work is critical and should be given its due as the essential underpinning of our thousands of local governments. Sometimes clerks are acknowledged, as this photo demonstrates. The late Linda Ruehle served as City Clerk to the City of Issaquah for 27 years. This statue outside City Hall speaks to her memory. May your work also be recognized and remembered. Thank you for your service. 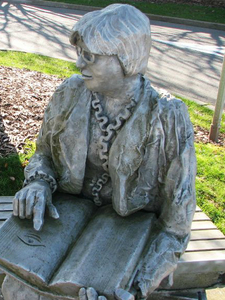