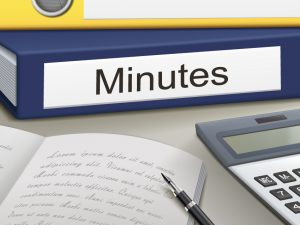 The biggest problem we encounter in meeting minutes is too much verbiage. Striving to do justice to their job, secretaries sometimes include the arguments that are made, what people say in response, and all the minutiae of discussion. There is a better way! According to Robert’s Rules of Order, minutes should record what is DONE, not what is SAID.

If you follow this guidance strictly, you will prepare action minutes. These simply list the actions taken by the body.

Nonprofit boards and committees may want to prepare summary minutes. These include points that were made during the discussion, without attribution to individuals. If you are ever called upon to defend your body’s action in a court of law, having summary minutes demonstrates that you exercised due diligence in your discussion. Sometimes state law requires this.

Detailed minutes listing “who said what to whom” have these disadvantages:

It can be hard to convince a group to move from detailed to action or summary minutes. People like to see a record of what they said. Detailed minutes make it easy for someone who wasn’t there to follow the argument and feel “in the know.” Sometimes the secretary is inclined to just let it flow and write everything down. This can seem easier than selecting out the actions taken, or summarizing the points made. Even so, we recommend that you fight against the tide and commit to making your minutes as concise as they can be.

Learn how to take great minutes with more articles at this link https://jurassicparliament.com/category/meeting-minutes/