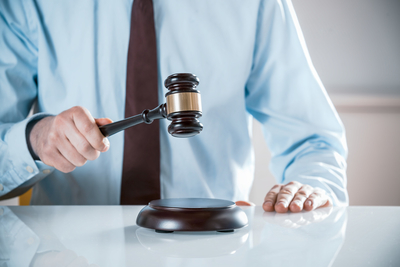 The term “pass the gavel” refers to a situation where the chair of a meeting (the presider, the person running the meeting) temporarily gives up the position of chair (the authority to run the meeting) to allow another person to preside over the meeting.

Pass the gavel in a large meeting

In a large meeting, the chair serves as a facilitator. The chair does not take any part in discussion and does not vote, unless the vote is by ballot. This enables the chair to maintain neutrality.

However, there are some circumstances where a chair should step down. Examples might be:

Ordinarily, the chair would pass the gavel to the vice-chair or vice-president, unless she also, because of involvement in the debate or for any other reason, should disqualify herself from presiding in the particular case. See Robert’s Rules of Order Newly Revised 12th edition 43:29 for more details on how this works.

Sample Script to Pass the Gavel

Chair: Since the chair is the subject of this motion to censure, the chair will pass the gavel to the vice-president.

[Vice-president takes the chair and presides while the motion is considered, until the vote has been taken and announced.]

Vice-President: Your vice-president will now return the gavel to the president.

Chair: Thank you, Vice-president. The next item of business in order is…

Sometimes we see a situation where the chair passes the gavel in order to make or second a motion, and then takes it back again. This is incorrect. Once the authority to preside has been relinquished, the chair remains as an ordinary member of the assembly until the matter is disposed of.

Jurassic Parliament concurs completely with this warning from Robert’s Rules:

Unless a presiding officer is extremely sparing in leaving the chair to take part in debate, he may destroy members’ confidence in the impartiality of his approach to the task of presiding. Robert’s Rules of Order Newly Revised, 12th edition 43:29.

Pass the gavel in a small board

It is a little-known fact that Robert’s Rules of Order has different rules for small boards (up to about 12 people). In a small board, the chair may make and second motions, take part in debate, and vote, unless the bylaws or other authorities prohibit it. Read Small board rules are different to learn more.

Although the chair of a small board may make motions, we strongly recommend that the chair refrain from doing so. If the chair is interested in a certain motion, they can say, “Would any member care to move that…”  Better decisions arise when everyone is on an equal footing, and the chair can encourage this by holding back. Note that this is a Jurassic Parliament suggestion and is not taken from Robert’s Rules.

So strictly speaking, the chair of a small board has no need to pass the gavel to make or second a motion or to participate in debate, unless the bylaws say otherwise. Of course in our first and second cases, conflict of interest, or a motion referring only to the chair, the chair should step down.

Learn more in our article When does the chair discuss and vote?

Posted in Robert's Rules of Order and tagged authority, censure, conflict of interest, duties of chair, gavel, ground rules for meetings, in charge, meeting management, parliamentary procedure, pass the gavel, Robert's Rules of Order, role of chair
← How to be objective about subjective commentsWhat about our elections in this pandemic? →