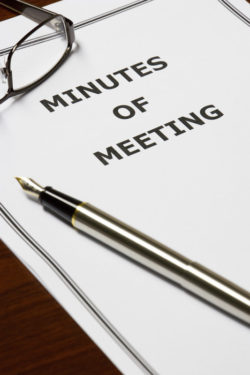 Meeting minutes recording the actions taken by your council or board are a fundamental part of the meeting process. These are our guidelines for meeting minutes in local government. They refer to ordinary business and work or study meetings of councils, boards and committees. Public hearings are governed by different rules.

WHAT KIND OF MINUTES?

WHAT TO INCLUDE IN MINUTES

DON’T INCLUDE IN MINUTES

PROCESSING AND APPROVING THE MINUTES

RECORDINGS OF THE MEETING

If questions arise about meeting minutes, consult your attorney. State law and regulations and your specific bylaws or rules of procedure have higher standing than Robert’s Rules of Order, other parliamentary authorities, or these guidelines.