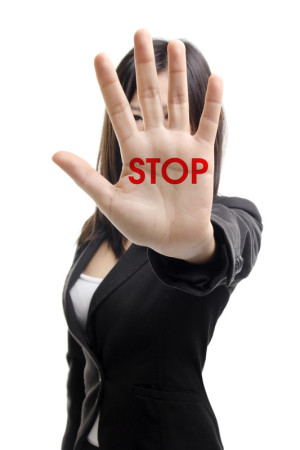 Don’t you hate it when you’re interrupted? How about when somebody else says something that feels like a personal attack? Being disrespected feels awful for any normal person. And the good news is that you don’t have to put up with it! Rude behavior is absolutely forbidden under Robert’s Rules.

When you are a member of a board of directors, a city council, a committee or any governing body that uses Robert’s Rules, you can stop rude behavior. Here are some sample exchanges:

1. Jasmine is explaining her position, when suddenly John interrupts:

John interrupts: Jasmine, you don’t realize that the rules have changed! We can’t do what you’re proposing.

Jasmine: Excuse me, John, I was speaking. Under Robert’s Rules, when a member has the floor, another member may not interrupt. Now, as I was saying…

2.  Suppose that Jasmine is a timid soul and not used to speaking up for herself? In that case, the chair of the meeting must stop the rude behavior and defend her right to speak.

Chair: John, Jasmine has the floor at this time. Interruptions are not allowed under our rules of order. Kindly wait until being recognized by the chair before speaking.

3. Later, Peter gets the floor and explains his views, and Michael jumps on him.

John:  Mr. Chair, I believe that under our rules of order, personal attacks are not allowed during discussion.

Chair: That is correct. Members will refrain from any attacking language.

4. Or, if Peter is so confused he doesn’t know what to say, the chair takes the initiative:

Chair: Michael, personal attacks of that nature are never allowed. Members will kindly observe the rules of our council and show courtesy and respect to one another at all times.

While we wish it were otherwise, there will always be some people in meetings who throw their weight around and try to dominate others. You have the duty and the right to defend yourself. And the chair, president, or mayor has the duty of keeping those folks in line.