When city councils, school boards or other public bodies hold their meetings, it is usual to reserve a time in the meeting for members of the public to speak to their elected officials. One common name for this is the public comment period. 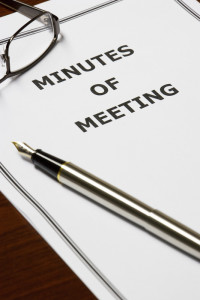 We recommend that detailed public comment should not be included in the body’s minutes. For background, read our suggestions about how to conduct the public comment period.

What is the purpose of meeting minutes?

According to Robert’s Rules of Order, and the common understanding of parliamentary procedure, minutes are a record of the decisions made by the body. They are supposed to include “what is done,” and not “what is said.” Personal comments and observations made by elected officials should not be included in the minutes.

What is the purpose of the public comment period?

Public hearings are different from the public comment period

Note that public hearings, formal structured events required by law for certain kinds of local government decisions, are different from the public comment period. It is characteristically a requirement that testimony provided at a public hearing should be recorded. This article is not about public hearings.

Here are some different ways to record public comment:

–  Resident Green said the board was doing a great job.

–  Resident Khan expressed concern about the cost of the new building.

–  Resident Robinson asked the board to consider employee welfare in the current negotiations.

Recently we’ve seen instances where detailed public comment in the minutes led to problems. During public comment, a resident objected to the way his comments at the previous meeting had been recorded. The body postponed approval of the minutes in order to redraft the comments to the resident’s satisfaction. This was a waste of public time and money.

In another instance, the secretary was asked to include a notation in the minutes correcting a statement, made by a resident during the public comment period, which was considered to be erroneous. This violates the purpose of minutes, which is to create a record of the meeting itself.

In yet another instance, the resident himself recognized that his remarks sounded foolish in the detailed record, and agreed that a change in practice was desirable.

The bottom line on detailed public comment in the meeting minutes

If your jurisdiction makes an audio or video recording of your meetings, public comment will be available for posterity. If it does not, in our view there is still no need to make or keep a detailed written record. The purpose of the comments is to inform the elected officials. That purpose is accomplished at the meeting itself.