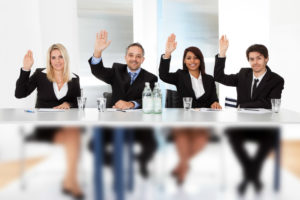 It’s interesting to see the many different ways people can call the vote at meetings.This is what Jurassic Parliament recommends:

If you are voting by show of hands, the same pattern applies:

Announcement after you call the vote

The announcement of the result has three parts:

The reason for this three-part approach is that sometimes a motion can have a majority in favor, but still fail.

For instance, in Washington State the law for nonprofit boards requires that a MAJORITY OF THE BOARD MEMBERS PRESENT vote in favor for a motion to pass (see RCW 24.03.110). As an example, if ten board members are present, and five vote in favor with three against and two abstaining, the motion has a majority in favor (“The ayes have it”), but it fails nevertheless, because five is not a majority of ten.

Robert’s Rules says not to call for abstentions

Note that Robert’s Rules of Order Newly Revised, 11th edition, says that “to abstain” is to do nothing. Robert says that the chair should not call for abstentions, and that abstentions are not counted (p. 45). This is fine for private nonprofit boards. However, on local government bodies, it is customary to call for abstentions (if they are allowed) and to record them. Read more about abstentions in our blog post, “If you abstain from a vote, what happens?

How NOT to call the vote

There are some things a chair must NOT do when it comes time to call the vote.

Example 1:  All those in favor, please say “aye.” All those opposed, same sign.

This old-timey usage is confusing and should NEVER be used, since it can befuddle everyone.

It is an ancient principle of parliamentary procedure that the chair MUST call for the negative vote. This goes back to 1604! Even if the chair believes that she hears everyone’s voice in favor, she still must say, “all those opposed, please say no.”

The only exception is a “courtesy resolution” thanking someone for their service or expressing general approval. But even then, if a member requests the negative vote, it must be taken.

Example 3: All those in favor, please say “aye.” Opposed?

It’s important to give those who may be opposed their full opportunity to speak. By shortening the “call for the negative” to “opposed?” the chair subtly implies that the opposition is not significant. Take the time to use the full phrase: “All those opposed, please say no.”

Posted in Voting and Quorum and tagged absention, announce result, call the vote, duties of chair, voting
← Nonprofit boards should not vote to approve minutesWhen the chair is a bully or out of line →