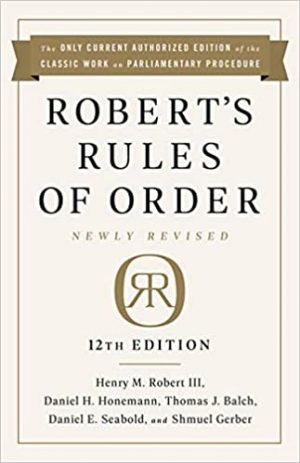 The regular monthly meeting of the L.M. Society was held on Thursday, January 4, 20__, at 8:30 P.M., at the Society’s building, the President being in the chair and the Secretary being present. The minutes of the last meeting were read and approved as corrected.

The Treasurer reported the receipt of a bill from the Downs Construction Company in the amount of $5,000 for the improvements recently made in the Society’s building. The question put by the chair “that the bill be paid” was adopted.

Mr. Johnson, reporting on behalf of the Membership Committee, moved “that John R. Brown be admitted to membership in the Society.” The motion was adopted after debate.

The report of the Program Committee was received and placed on file.

The special committee that was appointed to investigate and report on suitable parking facilities near the Society’s building reported, through its chairman, Mrs. Smith, a resolution, which, after debate and amendment, was adopted as follows: “Resolved, That . . . [its exact words immediately before being acted upon, incorporating all amendments].”

The resolution relating to the use of the Society’s library by nonmembers, which was postponed from the last meeting, was then taken up. This motion and a pending amendment were laid on the table after the chair announced that the guest speaker had received a phone message which would require his early departure.

At the conclusion of Mr. Mitchell’s talk, the resolution relating to the use of the Society’s library by nonmembers was taken from the table. After amendment and further debate, the resolution was adopted as follows: “Resolved, That . . . [its exact wording immediately before being finally voted on].”

Mr. Gordon moved “that the Society undertake the establishment of a summer camp for boys on its lakefront property.” Mrs. Thomas moved to amend this motion by inserting the word “underprivileged” before “boys.” On motion of Mr. Dorsey, the motion to establish the camp, with the pending amendment, was referred to a committee of three to be appointed by the chair with instructions to report at the next meeting. The chair appointed Messrs. Flynn, Dorsey, and Fine to the committee.