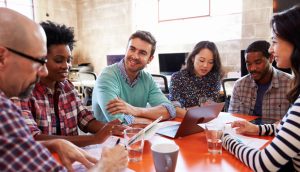 Got a really hot issue and a divided community? Too often, if you hold a traditional public hearing to deal with it, you run the risk that each side will simply line up and use their three minutes to tell the Council how terrible they are no matter how they vote. Want another option?

The Roundtable Community Workshop process, used successfully for many years in the City of University Place, forces each side to listen to the other and can help to move the process from a divisive “win/lose” result to a much preferable “consensus/compromise” result. This blog post will outline how it works.

First, do away with the traditional rows of chairs facing the Council dais and podium setup. Instead, use round tables (traditional rectangular tables work, but tend to have a head position, which a round table avoids) with seating for 6-8 per table, and enough tables for the size of the expected crowd. As people arrive, let them sit randomly wherever they want. Have space and a few extra tables and chairs you can set up if more than the expected number arrive but fill the initial tables with 6-8 first.

Have the Chairperson welcome everyone, explain how the Roundtable Community Workshop process will work, and then open the Community Workshop. The Chairperson will then ask the lead staff person to take about 15 minutes to outline the issue and present a set of key questions to be addressed during the roundtable discussions. Next, the Chairperson will open the public comment portion of the workshop where the participants at each of the tables will discuss the issues that were outlined in the staff presentation.

Each table will be equipped with a flip chart and felt pens, and each table will select a notetaker to take topic or summary notes of the group comments (no editing). At the end of the agreed discussion period, each table will then select a spokesperson (not the notetaker) to report out on the group discussion, including both majority and minority opinions.

After all tables have reported, the Chair should then ask if anyone has anything else to add or feels wasn’t said. Repeat for Question #2, #3, and so on, until all questions outlined in the staff presentation have been discussed. The Chair then closes the public comment part of the workshop.

The Chair will then ask each councilmember to summarize the differing points of view they have heard, or the Council may ask for further clarification from specific individuals or tables on particular comments. By now it is usually obvious that however any one person felt on an issue, there are other equally valid points of view for the Council to consider.

Then the Chair can ask for a motion, second, and begin discussion before calling for a vote.

Coming into a Community Workshop on any hot issue, it is common for people to assume that many of the folks in the room hold your point of view. It is only by listening to the discussions and report outs that all points of view are aired, and hopefully the focus on the Council as either the “good” or “bad” guys will dissipate—as respect for true community differences of opinion emerge.

The City of University Place used this process quite successfully on various topics and at various times while I was City Manager from 1995-2010. I believe that it was the roundtable discussions and community involvement in the development of the city’s town center plan, with its associated controversy, that allowed the city to persevere during the Great Recession against its toughest critics. Now the city just leaves the round tables set up routinely for council meetings as normal, even without a roundtable workshop scheduled.

Application to Other Community Discussions?

The same setup and format can be used for hosting various types of community conversations and to gather input for budgeting, land use, or other similar issues, including priority-setting.

In San Juan County, following years of tough political splits, the San Juan County Council hosted the “San Juan County Community Conversations SJC3” over a 2—3-month period. Given the physical separation of the islands (San Juan, Lopez, and Orcas) the same topic was discussed each night on each of the islands, with three questions each night per topic, and each table giving their report out. Instead of the Chair summarizing at the end, citizens were asked to comment on the process and if they felt it worthwhile.

This process could easily apply to neighborhood or district meetings in any community. Roundtable Community Workshops mean that every view is respected, and everyone is a winner! For more information, please feel free to contact Bob Jean, ICMA/WCMA Senior Advisor, at bjeaninup@gmail.com.

This article was originally published by MRSC, a nonprofit dedicated to local government success in Washington. Jurassic Parliament gratefully acknowledges MRSC and Bob Jean for permission to share this concept with our readers. Visit www.mrsc.org for a wealth of valuable information and resources on local government.