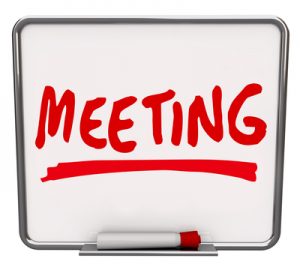 Sometimes in order to conduct business the assembly meets in a series of meetings. This series of meetings is called a “session.” Robert’s Rules of Order Newly Revised, 12th edition (RONR) gives these definitions:

A meeting of an assembly is a single official gathering of its members in one room or area to transact business for a length of time during which there is no cessation of proceedings and the members do not separate, unless for a short recess. RONR Section 8:2(1) (More information about the “room or area” when meeting online is given in 9:30-36.)

A session may be loosely described as a single complete course of an assembly’s engagement in the conduct of business, and may consist of one or more meetings. RONR Section 1:4

A recess is a short intermission or break within a meeting that does not end the meeting or destroy its continuity as a single gathering, and after which proceedings are immediately resumed at the point where they were interrupted. RONR Section 8:2(3).

An adjournment terminates a meeting; it may also end the session. RONR Section 8:2(5)

Examples of meeting versus session

Oftentimes the meeting and the session coincide. When a city council meets on the 2nd and 4th Tuesday of each month, each meeting is also a complete session.

Sometimes meeting and session are different. When a professional board meets on Saturday for 6 hours, and finishes up on Sunday morning for 3 hours, the assembly participates in one session made up of 2 meetings.

If your garden club meets on Saturday at 10 am and cannot finish its time-sensitive business, a member can move “to adjourn the meeting to Monday at 7:00 pm.” In this case, the words “adjourn to” amount to “continue, not end the meeting.” Rather confusingly, the Monday meeting will be called an “adjourned meeting.” Both meetings together make up a single session.

A national convention is often a single session made up of a series of meetings over several days.

On the state or national level, a legislature holds many meetings over a course of months. These meetings make up a single session.

Note that the term “summer recess” as applied to Congress is a colloquialism that has no relation to these technical terms. In addition, the phrase “executive session” means that the group is meeting privately, and is not related to this discussion of “session.”

Why does this distinction between meeting and session matter?

This distinction between meeting and session matters because under Robert’s Rules of Order, during a meeting, the assembly or group is under certain limitations that do not apply to a new session.

The principal significance of the session as a complete unit of an assembly’s engagement in proceedings lies in the freedom of each new session, as contrasted with the limitations placed upon a session in progress by decisions it has made… As a general rule, one session cannot place a question beyond the reach of a majority at a later session except through the process of adopting a special rule of order or an amendment to the bylaws.  RONR Sections 8:11 and 8:12.

For example, if a motion has been defeated during a session, it can be brought up again during that same session only if a member who voted with the prevailing side moves to reconsider, and the assembly votes to do so. However, such a motion could be renewed (introduced again) at a meeting in a future session. See our article on renewal here.

Read RONR Sections 8:11 – 16, Significance of Session, for more information about this.

As mentioned above, ordinarily each weekly or monthly meeting of a local government body is a single session. There are instances, however, where city councils define “session” to mean all the meetings held over the course of a year. The intention, it seems, is to prevent defeated legislation from being brought up again too soon. This seems a bit of an overreach to Jurassic Parliament, but maybe it works for your body? If so, please let us know!