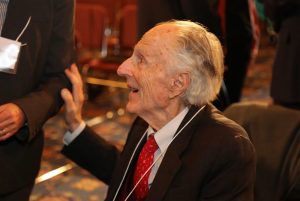 David Hamburg at an event marking the 25th anniversary of the Nunn-Lugar amendment to the Soviet Threat Reduction Act of 1991. (Carnegie Corporation of New York)

In 1975, my late husband Lew Macfarlane spent months in Tanzania working to free Stanford students who had been kidnapped by rebel forces. The students were studying chimpanzees in Jane Goodall’s research project in Gombe when they were captured. David Hamburg, then a professor at Stanford University, joined Lew and others as they struggled with this challenging situation, which resulted in a successful rescue.

When Dave passed away last month, I thought of his remarkable combination of personal insight and global strategic thinking. He and his wife Betty, who had died before him, were psychiatrists who strove mightily to improve the human condition in their professional capacity. After the Gombe experience, Dave made a deep dive into issues of violence, war and genocide. He served as head of the Carnegie Corporation of New York, convened experts on the subject, authored books and articles, and was awarded the Presidential Medal of Freedom in appreciation for his wide-ranging work.

Dave’s obituary in the Washington Post quotes these words:

“We’ve just got to say, war is not like the weather—that comes and goes, and we have to live with it and roll with the punches.
We’ve got to mobilize human ingenuity to find ways to prevent it.”

Posted in Inspired Leadership and tagged genocide, leadership, war
← Parliamentary procedure for junior and high schoolsUsing the Round Robin Method for efficient board meetings →