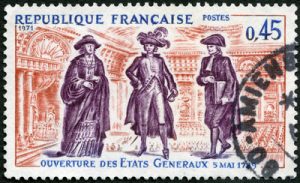 The current turmoil in our country over social justice issues isn’t the first time, of course, that people have grappled with inequality. August 4, 1789 was a landmark in the struggle to recognize all human beings as equally worthy. Representatives of all 3 “estates” were meeting in Versailles outside Paris—the clergy, the nobility, and the commoners. During that night, feudalism was abolished. Noble titles, sale of offices, unequal taxation, the game laws, and rules and privileges favoring the nobility and the church were swept away.

When I first read about this night, I couldn’t believe my eyes. It seemed astonishing to me that the nobility and the clergy would give up their privileges of their own accord. It was a seismic shift in understanding. That night sowed the seeds for the “Declaration of the Rights of Man and the Citizen,” one of the founding documents for the human rights movement in Western society. You and I are the beneficiaries of this movement.

As could be expected, carrying out the decrees took a while, and not all the decrees were realized. When a society is gripped by fervor for an ideal, time and patient effort are needed to take the administrative steps necessary to make it real. One of the most encouraging signs of our present time, to my mind, is the administrative effort that I see people making.

Across the nation, institutions and organizations large and small are examining their own charters, policies, and practices through the lens of racial justice. They know that this movement is a call to affirm the ideals of our founding, and to realize “a more perfect union.” They are committed to the oath made by the poet Langston Hughes in the depth of the Depression: “America will be.” When August 4 comes around, we can remember those privileged aristocrats who were willing to sacrifice their own position for the sake of a better society for all, and renew our own efforts for the same goal.

If you would like to make your own endeavors as effective as possible, watch our free webinar, “Better Meetings Advance Social Justice.” You can access it here.