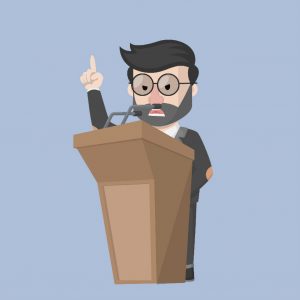 In this country today, the First Amendment to the United States Constitution is the foundation of our civil liberty. The freedoms that it lists are crucial to our society. When we read accounts of how these freedoms, in other nations, can be abridged, limited or ignored, we react with horror. And yet it is also important to acknowledge that in the matter of free speech, the First Amendment is not the last word.

“Congress shall make no law…abridging the freedom of speech…”

These 10 words have been interpreted to allow words and actions of an extraordinary breadth and variety. And sometimes, in our public meetings, people engage in hateful, vicious, personal and wide-ranging attacks on institutions and individuals, waving the banner of free speech. They sometimes take actions, defended as free speech, which physically disrupt the meeting.

We would like to offer a framework for consideration of free speech at public meetings, in the hope that it will be helpful to elected officials and local governments struggling with these issues.  Our examples are from Washington State. Refer to your state law for the specifics that apply to your situation.

It is clear from current research into how the human brain functions that when people get loud, offensive, and insulting, a group is not able to do its work. When the amygdala sends out signals of fear and rage, the prefrontal cortex, the part of the brain that is capable of reflecting on and making decisions about complex issues, stops functioning. This means that angry emotions and disruptive actions can have the effect of hijacking a meeting.

Honor the First Amendment, establish rules, be prepared to act

Sometimes that’s what protesters want. It means, though, that those same protesters are stealing from the public. They are preventing our officials from doing the work that they were elected or appointed to do. We encourage you to be proactive and definite. Honor the First Amendment, establish rules that will protect your group to the best of your legal ability, and be prepared to act when disruption threatens. To do otherwise is to run the risk of wasting your time and the public’s resources.

Have you had to deal with disruptive members of your governing body, or of the public? We invite you to share your experiences.