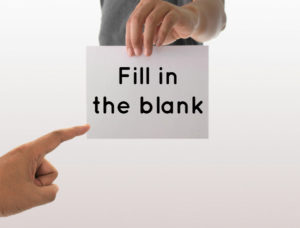 Have you ever wondered whether a fill in the blank approach could be useful to your board or council? Sometimes a board of directors has to make hard choices about selling property, giving the executive director a raise, making an appointment or choosing a date to schedule an event. Robert’s Rules of Order offers an easy way to choose among multiple options. The fill in the blank approach is very efficient.

EXAMPLE OF FILL IN THE BLANK

Suppose that the board is planning to sell a surplus land parcel. The staff has proposed a motion, “That the surplus land parcel be sold for not less than $100,000.” Some board members think that this is too low – the organization could easily get $200,000 for the parcel.  Others think that it is too high – given the current real estate situation, they’ll be lucky to get $75,000.

A member of the board or the chair can suggest “that we create a blank.” If there is no objection, staff writes the motion on a white board like this:

Members suggest a price that they think ought to be the minimum, which the secretary writes in order from highest to lowest, so the list looks like this:

The group holds a brief discussion period, with each member explaining, if they choose to, why they believe their choice is the best one.

TAKING THE VOTE TO FILL IN THE BLANK

Then the chair takes the vote on each number to fill in the blank. Key points here:

FILL IN THE BLANK AND THEN VOTE ON THE ISSUE

Debate continues on the motion, and then the board votes. In other words, “filling in the blank” does not mean that the body has ultimately decided on that number, it merely defines the number for further discussion and decision-making.

THE DANGER IN THE FILL IN THE BLANK APPROACH

The tricky part here is that each member should vote on each number. Sometimes people are silent on the first choices, planning to vote for the number they personally prefer. But if they don’t vote “no” early on, it is possible that one of the earlier numbers will receive a majority vote and be approved BEFORE the group gets to the number the member is waiting for.

Although not technically an amendment, fill in the blank is a good way to amend a motion when there are many options. It can save a lot of time and make hard choices much easier.