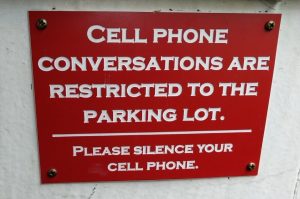 Jurassic Parliament strongly recommends that local governments establish a policy requiring elected officials to put away their cell phones while on the dais. Checking your email, texting to constituents, or posting on social media means that you are neglecting your duty to your council and your community.

When you use your cell phone, you’re not really there

It’s been conclusively proven that multi-tasking is a myth. When you use your cell phone, you’re not really at the meeting, you’re in your own private world. This weakens the cohesion of the group, distracts others, and wastes time—both your own and that of the group as a whole.

In addition, you may be at risk of violating your state’s open meetings act. Texting is hidden from the public, but texts are public records. There was case in Washington State some years ago when a councilmember sent sexually explicit messages to his mistress in the audience. They all came out.

Cell phone use may create collusion

And for heaven’s sake, don’t collude with your fellow councilmembers by texting to them. In Washington State, the attorney general has determined that all texts sent by officials at meetings are a public record, whether they are sent on a personal or an official phone. Jurisdictions must establish a policy to preserve them. Read more about this on the MRSC website here.

If you are a doctor on call, or you have a sick child at home, it is reasonable to keep your cell phone on vibrate in order to respond to genuine need. Most of the time, however, we keep our cell phones on out of habit, and because we’ve lost the ability to tolerate the length of our meetings, which are sometimes boring.

Make an effort and give your full attention to the meeting and your colleagues. The work of your council deserves and requires no less.