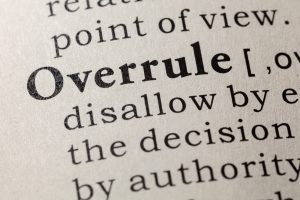 Robert’s Rules is very clear on this point.

A board may never alter a decision of the society’s assembly (and an executive committee may never alter a decision of either the assembly or the board), even by a motion to Rescind or Amend Something Previously Adopted or by adoption of a proposal which has been rejected, unless expressly authorized by the superior body or the bylaws. Robert’s Rules of Order Newly Revised, 12th edition, section 56:41.

Executive committee on their high horse?

Nonprofit organizations may be different

This guidance applies to membership organizations like clubs or professional associations. Many nonprofit organizations are different. They don’t have “members” in the sense of people who have a right to direct the organization. If you join a museum as a “member,” for example, likely you have no role in museum governance.  The museum board will listen to its stakeholders, but is not directly answerable to them.

Have you had issues like this? Let us know!