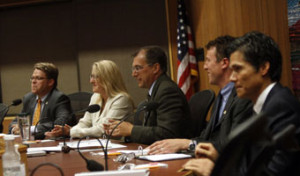 There are a number of “urban myths” about Robert’s Rules of Order that can get in the way of democratic process for your council. If your municipality, county council, or special district avoids these bad habits, congratulations! If these errors happen at your meetings, however, you might want to bring them to the attention of your colleagues to straighten them out – in a pleasant way, of course!

Any thoughts on these bad habits? Any other “urban myths” to share? We welcome your comments!