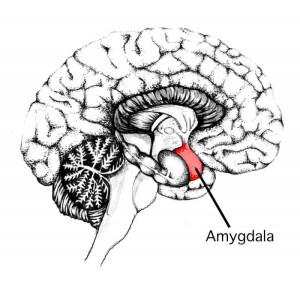 The amygdala, involved in memory, emotion and fear

My nephew was visiting us last weekend when he was hijacked. One moment, he was an affable, engaged and charming member of the family — the next, a seething mass of rage and anguish. I reacted with compassion. I knew that he doesn’t yet have the skills to prevent his amygdala from taking over. But his prefrontal cortex has already developed the ability to respond to reason. My bribe of a popsicle wasn’t needed — he was able to hear my soothing words and calm himself down. When you’re three years old, that’s pretty darn good.

The new research on emotions has given us a picture of the brain far different from the external bumps of 19th-century phrenology. We now know that different parts of the brain play different roles in our functioning. The amygdala, shaped like an almond low in the brain, is ancient and fast. It sends out signals of fear and rage the instant we feel threatened. The prefrontal cortex, the brain cells just above the eyes and behind the forehead, developed later in human evolution. This is the brain section that reasons, evaluates, and thinks. It is a lot slower.

Whenever human beings interact, all parts of the brain are involved. This means that at board or council meetings, the potential for “amygdala hijack” is always present. If something happens to make members or attendees feel threatened, each and every amygdala will send out signals saying “Watch out! Be careful! Fight back!”

When you are leading any group, it is your duty to ensure that this is not the last word. You need to establish and maintain conditions where the rational part of the folks present governs their words and actions, not emotions of fear or anger.

Your own inner state of being is the first controlling condition. How you feel, how you react, and how you speak sets the stage for everyone else. The words of the oracle at Delphi, “know thyself,” are still pertinent today. Every leader needs to keep a checklist of the members who drive him crazy and the issues that press his “hot buttons.” A leader who goes into a meeting fully aware of her own inner vulnerability will be much stronger in the crunch.

Setting meeting policy is the second controlling condition. When limits have been established ahead of time, it is easier to contain raw emotion and potential disorder during the meeting. If you have adopted Robert’s Rules of Order, you have such policies in place, but people might need to be reminded of them.

Having an educated membership is the third controlling condition. When a group knows about the need to keep things orderly, and agrees to be civil in order to achieve its goals, the leader can keep things on track much more easily.

Temper tantrums in a three-year-old aren’t pretty, but the damage is slight. Emotional outbursts at council or board meetings are another story. Generating the necessary understanding to prevent such events, and having the tools in place to control them when they occur, will pay big dividends.